In the heart of the Eixample district, this apartment has been stylishly reformed.

The Haydn I apartment is a quieter choice of apartment, as it is not in the heart of the ciutat vella but still centraly located so that the guest is not far from the action of La Rambla, Plaza Cataluña, El Borne or the Gothic Quarter…..

The area surrounding the apartment:

The area surrounding The Haydn I apartment is known as the Eixample district, the birthplace of the Modernism movement, home to the wonderful works of Antoni Gaudí. When looking to experience Barcelona’s world renowned reputation for architecture, this area is king.
The famous and impressive Sagrada Familia, Gaudí’s La Pedrera and Casa Batlló in the Manzana de la Discordia and the sprawling Hospital de la Santa Creu in Sant Pau -are all within walking distance.

The Gràcia neighbourhood, which is at walking distance too, takes you into an entirely diferent world. Gràcia has a very special and unique character that lies somewhere between a bohemian artsy enclave and the latest cutting-edge trends with a lively and vibrant atmosphere; a popular spot for both nocturnal and daytime leisure activities with unique bars and restaurants and houses featuring outstanding examples of Catalan art-noveau architecture, such as Gaudi”s Casa Vicens and Domènech i Montaners’s Casa Fuster.

Walking time to the metro station closest is only 3 minutes; the stop is Sagrada Familia and you can take the blue line (L5) or the purple line (L2). You can also take one of many buses that stop across the street from the apartment; these bus lines will leave you at the heart of old Barcelona (Plaça catalunya, El Borne, The Gothic Quarter, Port Vell… ) in less than 20 minutes. The Barcelona Tourist Bus stops on the same street as the building; you can take it to visit Park Güell and any other places of touristic interest in Barcelona.. 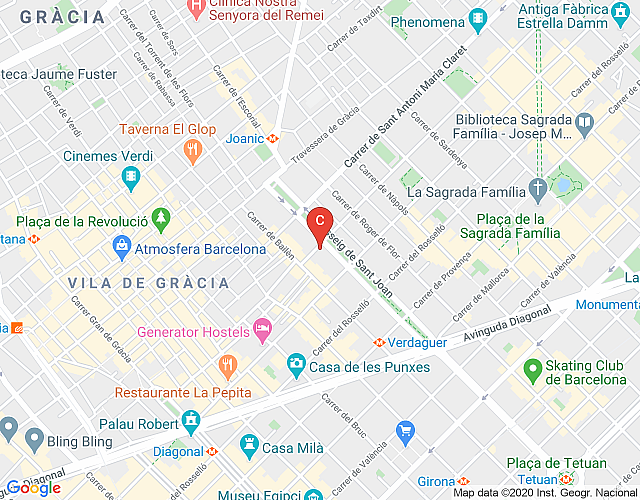